Axis Communications Tuesday opened its Dallas Axis Experience Centre, based in nearby Irving, Tex. Dallas is also the host city for the annual ASIS International conference this year, which concludes this week. 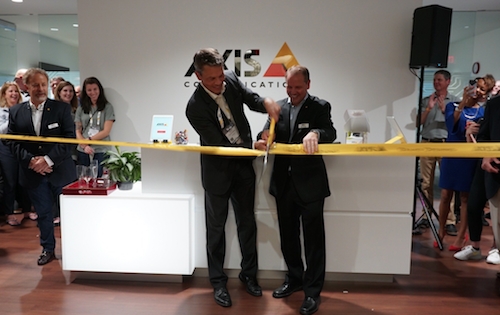 The Dallas AEC is a 7,100 sq.-ft. facility located in a business park adjacent to a manmade lake. The AEC contains a 30-person training centre, conference rooms, and demonstration areas that cater to vertical market needs such as gaming, retail and critical infrastructure. There are also examples of 60 Axis devices on site, including cameras, access control, audio, analytics and intercom.

Axis first announced its North American expansion plans in 2014. “Since then, I’ve been busy cutting ribbons,” said Fredrik Nilsson, VP, Americas, Axis Communications, who was on site for the official Dallas opening.

The company also has global AECs in London, Munich, Madrid, Milan, Dubai, Hong Kong and at its headquarters in Lund, Sweden. They are all alike in appearance and provide a similar “experience,” but are not cookie-cutter. The process of opening AECs has been an evolution, said Axis’s CEO Ray Mauritsson. “They’re learning from each other and adding local touches.”