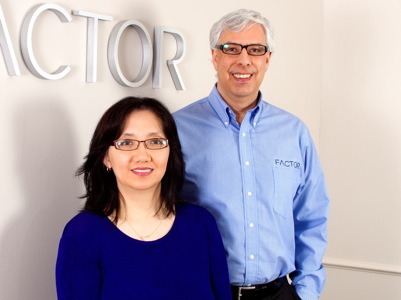 Factor’s president and CEO Danny Moore says Factor designs all of its equipment in Canada and builds 95 per cent of it in China.

“The main benefit to the customer is that the products are not generic,” Moore said. “The features and performance have been developed partly from feedback that I have received from dealers and installers across the country.”

Located in Surrey, B.C., a suburb of Vancouver, Factor opened its doors for business in January 2011. Explaining the company’s name, Moore says the dictionary definition of factor is “one that actively contributes to an accomplishment, result or process.”

“That pretty much sums us up,” Moore said. “We are here to support the dealers and contribute to their success.”
Moore says that what differentiates Factor from its competitors is that it puts a special emphasis on customer service.

“Certainly there are other service-driven companies out there, but suppliers seem to be more box-driven,” Moore said. “Factor is a Canadian company, our stock is here in Canada. We can react quickly to the needs of Canadian security and audio-visual companies.”

“Most installers are very tech-savvy, but for those who specialize in security, AV is a secondary part of their business,” he said. “We can help them with their design questions and make the job run smoothly from the quoting stage to the final system commissioning and after-sale support.”

Moore says there are growing opportunities for security integrators in AV equipment.

“Security integrators are installing more AV equipment than ever before,” he said. “And in the future it will play an even larger role for them.”

Moore says it makes more sense to sell more products – such as AV equipment – to existing customers than to try to find new customers for their lines of security products.

Moore says his company has made “every effort possible” to design products that are environmentally-friendly.
“An example is the Powersaver energy-saving power bar, which reduces energy consumption in many different types of installations,” he said.

According to Moore, the Powersaver can eliminate standby power and reduce the energy costs incurred by homes and businesses by automatically shutting equipment off when it is not in use and then automatically turning everything back on again when users want to use it.


The Powersaver comes in two power saving-modes. One is a digital timer that can be programmed to turn itself off when the user is sleeping and back on again when the user is awake and ready to use it. In addition, the Powersaver has current- sensing outlets that can detect when a user’s computer, television or home theatre equipment is in use and when it is not. The device automatically shuts down such peripheral equipment as printers, photo copiers, monitors, speakers, amplifiers, DVD players and studio equipment when they are not being used and back on again when they are.

In addition to the Powersaver, Factor recently came out with a line of environmentally-friendly amplifiers which consume less energy than conventional models.

The new line, called the V-Series, is designed for background music and voice-paging systems in commercial, industrial and retail buildings. Moore says the amps can be used by any professional installer.

“Part of the V-Series amp line uses digital amplifier technology which reduces the size and weight of the amplifier,” he said. “In addition, the AC draw from the wall has been dramatically reduced.”

“That’s a power usage saving of close to 70 per cent, not to mention the reduced shipping, storage and fuel costs to deliver the product to market,” Moore said.

In addition to the Powersaver and V-series line of amplifiers, the company is planning to release its own line of energy-efficient LED (light-emitting diode) light bulbs in mid-2011.

Moore says the company sells to accounts across North America. He handles Western Canada himself and a network of sales representatives and distributors deals with the rest of Canada and the United States. Its rep network so far comprises GP Marketing in eastern Canada; Northmar Inc. in the northwestern United States; the B. Rich Company in New York; Strategic Sales LLC in the western US; and the RPR Group in the eastern U.S.

“We are in the process of getting our products and links on their websites now,” Moore said.