The Apple iPad was initially released in April 2010. Early adopter and former CANASA executive director J.F. Champagne took his first iPad to CANASA’s Security Canada Alberta in May 2010. “I probably spent more time talking about the device than anything else,” he wrote in SP&T News, “but it did validate my belief that the iPad will be a game-changer.” 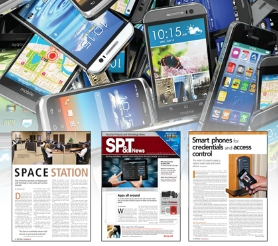 Champagne listed some of the possible advantages of the device, including a better experience between consultant and customer (a less clunky interface than a laptop), and tablets as point-of-sale devices, as well as installer/technician tools. All of those have come to pass and more.

Tablets and smart phones (Apple, Android and others) have forever changed the industry as security vendors and service providers utilize devices as their own selling tools and also to provide a more feature-rich experience to the end user.

In a 2011 article penned by Raj Venkat of what was then Ingersoll Rand’s security business (now Allegion), the use-case for devices as access control was spelled out, promising mobile credentials for student populations across college and university campuses. The article asserted that (even six years ago) smart phones were never more than an arm’s length away for 91 per cent of users.

Our May 2013 cover story focused on how mobile apps had changed the industry to date: March Networks had just launched its Guru app, allowing integrators to scan video recorders marked with QR codes. Tyco Security Products’ Scott McNulty said the company’s recently introduced EntraPass app “helps close deals. You can sell the end user on a system and then, on top of it, they have all the power to manage everything from the mobile application.” In the same article Avigilon’s Rick Ramsay hit upon what may be the smart device’s ultimate killer app — it’s size. “It’s more convenient to have a phone at the top of your ladder than a laptop,” he said.