News
Ahead of the class 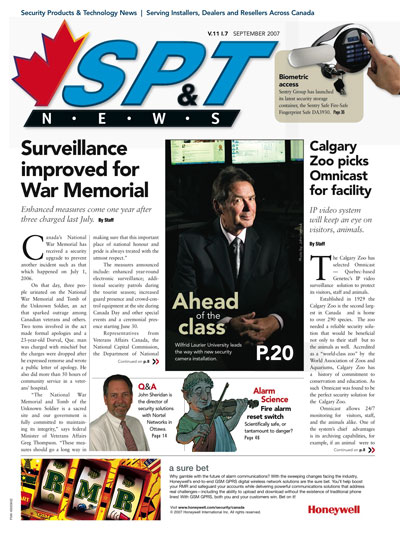 Campus security has become something of an obsession to the administrators of Canada’s colleges and universities over the past year.

Following the high-profile shootings at Dawson College in Montreal in the fall of 2006 and Virginia Tech massacre this past spring, post-secondary schools across the country have been scrambling to show students, staff, and the larger community that they are indeed taking security more seriously. As such, many schools are announcing plans to shore up defences and outfit security personnel with the latest in crime-fighting hardware.

Unfortunately, campuses are exceptionally difficult to secure. There is simply too much open space, too many buildings, and thousands of people on site at any given moment. Worse, the often cash-strapped institutions are hard-pressed to come up with funding for new personnel and equipment.

But many campus security officials, like Rod Curran, head of security at Wilfrid Laurier University (WLU) in Kitchener-Waterloo, Ont., are enjoying a head start in the race to secure places of higher learning. Curran, director of campus security at the southwestern Ontario university that serves roughly 12,000 students, launched an initiative to ramp up security shortly after joining the school in February, 2005. A large portion of the $379,000 he’s spent so far has been used to bring the campus under near-total video surveillance.

While preventing campus shootings of the sort seen in 2006 and 2007 was certainly an objective, the new technology was largely installed to bring commonplace problems like assault, theft, vandalism, and general campus mischief to heel at WLU.

“Part of my security plan when coming to the university was to adopt a community-based policing model,” says Curran, who also heads up the Ontario Association of College and University Security Administrators. “The goal has been to incorporate technology with physical patrol.”

But beefing up security was a tough job, admits Curran. When the 31-year veteran of the Guelph, Ont. police force began at the university, the school had a paltry 10 cameras covering all three campuses located in Brantford and Kitchener-Waterloo. Yet over the following two years, Curran has overseen the installation of nearly 150 cameras.

“As of right now, 80 per cent of the school is under video surveillance,” he says. “The goal is 100 per cent coverage, excluding the dormitories. But cameras are also being installed at the entrances there as well.”

Curran admits that, initially, the school’s administration considered the camera installs controversial.
But since then, external events have made campus security more of a concern.

“I had to get the university to buy into the concept of video surveillance. It’s an open facility and many didn’t want to have cameras watching people all of the time,” he says. “But I was lucky to have the support of the president, Dr. Robert Rosehart, and the school’s V.P., Jim Butler, to make change within the organization.”

To help with the installs, Curran turned to Defence Security Systems Inc. of Cambridge, Ont. The company, which specializes in serving public institutions, schools, and municipalities throughout the region, provided WLU with all of the hardware it needs. And it’s a partnership that will continue to grow, says Ted Camilleri, president of the company.

“It’s definitely one of the largest jobs we’ve done,” he says. “But it’s growing all the time.”

While video cameras represent a huge part of what’s happening at WLU, it’s only a portion of the bigger picture. Here’s a wrap-up of all the security hardware WLU is adopting:

• So far, Curran has overseen the installation of 148 cameras at a cost of $150,000. Systems include: Pelco pan-tilt-zoom (PTZ) cameras; technology from Capture, including smoke dome cameras and mini PTZ colour systems; as well as cameras from National Electronics.

• 131 of the cameras on the Waterloo and Kitchener campuses are monitored 24/7 through a new
$33,000, 13-monitor, computer-based dispatch center. The Guelph police force has even trained the student dispatchers on customer service and call-taking.

• The cameras feed data to 11 DVRs from Burtek. Three more DVRs will be added this summer. The total cost is $98,000.

• An upgraded alarm system has been added. It includes DSC PC 4020 and DSC PC 4501
annunciator key pads. In addition, WLU has installed main door contacts, dual-technology motion detectors, and sirens to augment the cameras. Anti-theft devices for school computers and AV equipment have been provided by LightGard. Since installing this equipment, theft of overhead projectors at WLU has ceased.

• Curran has also implemented some decidedly low-tech measures to fight crime on campus. He points out that the school was the first in Canada to implement a Neighbourhood Watch program in the dormitories. There has also been a Crime Stoppers program added. In addition, his department is forging stronger relationships with the residence committees as part of its broader community policing initiative.

While the new technology has cost several hundred thousand dollars, Curran says the payback in terms of safety, security, and peace-of-mind has been enormous.

“Any arrests we get are a bonus,” he adds.

And the cameras certainly have helped in that capacity as well. Curran says, since rolling out the new technology, his security team has caught a number of criminals.

“Success can be measured in the number of people you lay charges against,” he says, adding that they are also a great deterrent as well.”

Curran says that all of this technology has put WLU at the forefront of campus security. “Along with schools like the University of Ottawa, we are one of the leaders in using video surveillance in Ontario,” he says. “Most other colleges and universities are just getting into this field now.”

And it’s not just colleges and universities that are taking notice of WLU’s plans. The technology is also the envy of businesses as well.

“We’ve had companies come in from the private sector to look at our system,” he says. “One comment
I’ve heard from these people is that we have a better security system than most Fortune 500 companies.”

While WLU has a jump on other schools when it comes to security, Curran expects to see more and more Canadian colleges and universities embrace the technology in the coming years. In fact, it would be folly not to, he argues.

“Like many schools, we have limited security personnel, so this type of technology is a huge benefit to us,” he says. “Anyone who doesn’t go this way to protect their campus is crazy and they’re going to lose the battle.”

Criminals who prey on the students and staff at Wilfrid Laurier University (WLU) are getting an education of their own about the strength of the school’s ongoing security camera installation. Here’s just a snap shot of some of the many perps who have been caught red-handed since the installations began.

• During a three-month period last year, there were approximately 35 locker B-and-Es in the school’s athletic center. Curran and his staff used a remote camera to identify the thief. “The next time he came back to the building, we were able to arrest him,” he says.

• Vandalism in the school’s geography building had been an ongoing problem for the university. However, Curran says that, since installing cameras there, problems effectively ceased. “We had over 100 incidences of vandalism, theft, and break-and-enters in that area,” he says. “Since we put them in last spring, there have been none.”

• The school’s outdoor cameras have already proved their value as well. Recently, a PTZ system atop the main building on the WLU main campus picked up some people moving furniture out of one of the dormitories. Security personnel were able to track the individuals in real-time as they carried the furniture off campus and into a private home near the school. “The next day, the police looked at our footage and went over there to make an arrest,” Curran says.

• When a student high on LSD went streaking through a building on the WLU main campus early one morning in April, the newly-installed cameras there captured the entire event. Security guards quickly moved in and arrested the immodest student, who turned out to be from a neighbouring university. Interestingly enough, the entire affair took place mere hours before an official public ceremony to unveil the same cameras. Footage of the incident was even shown at the event. While the images drew laughs from the assembled crowd, they helped underscore the serious value of the technology.