Video surveillance has gone through an enormous transformation over the last decade. 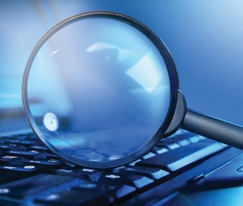 New technology has allowed manufacturers to rapidly improve their products through both hardware and software changes. Hardware innovation has allowed cameras to become smaller, lighter, and easier to install. These same hardware advancements have enabled cameras to be powered solely via PoE and operate in extreme environmental conditions. While hardware innovation continues to drive change in the way we install and operate surveillance systems, some manufacturers have begun shifting their focus to software in order to differentiate themselves from the competition.

Historically, one of the most painstaking tasks of using a video surveillance system was searching for recorded footage. Originally, the only way you could search through video surveillance footage was by fast-forwarding through the video until you saw what you were looking for. Once digital video surveillance was introduced, pixel search became the most popular method of speeding up searches by sectioning off part of the scene and only searching for activity in a select area. More recently, new technology has been introduced that allows users to search video in a more efficient manner. Colour, size, direction, and other characteristics are becoming the next trend in search technology. In addition, some platforms allow users to select an object and simply search for other occurrences of that same object. While the technology still has room to grow, it holds a lot of potential. Being able to search recorded video footage as easily as searching Google is not possible yet, but it’s an exciting concept which may someday be reality.

Another area where video surveillance has been desperate for innovation is storage and bandwidth. Hardware is costly, but as camera resolutions have increased, integrators have had no choice but to add additional hardware to cope with the increased storage requirements. H.264 compression was a tipping point for IP surveillance, which finally made it an affordable alternative to analogue. Unfortunately, little innovation has taken place since then, despite camera resolutions only getting higher. Within the last year, however, several manufacturers have taken steps to combat this challenge. One such technology is best described as dynamic image processing. This technology filters unnecessary information out of the scene and adjusts frame rates in real time to produce high frame rate surveillance footage using a fraction of the bandwidth. Of course, low bandwidth is not only good for remote viewing but also drastically reduces storage costs, which can make a significant difference especially on large projects.

Improved searching capabilities and better compression do require some type of upgrade to existing systems. While some features rest in the camera, many of these features require the right combination of camera and video management system (or VMS). This presents a real advantage for manufacturers who are attempting to compete with low-cost hardware. To win entire projects that include both the cameras and recorders, manufacturers need to ensure both products have desirable features. More importantly, manufacturers need to ensure the benefits are compounded when using their cameras in combination with their VMS.

Hardware continues to improve and advance at a steady pace, but for manufacturers to stay ahead of the pack, they need to focus on software which can be developed at a much quicker pace and create a far more “sticky” relationship with the customer. Whether searching through hours of recorded footage, or attempting to transmit and store large volumes of data, integrators and end-users still have pain points that could be addressed through software. By targeting these pain points, manufacturers can differentiate themselves and truly separate their products from the competition.