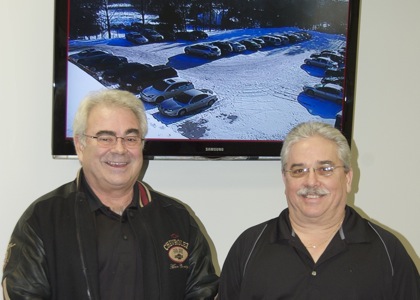 A new security system that provides simultaneous wide and focused camera views through software integration is currently being beta tested in a Toronto suburb.

The camera is the 5-megapixel Oncam IPZoom 360° and the test site is Commport Communications International Inc., a secure data facility in Aurora, Ont.

Bob Miller, president of SecureVisionView Inc., also located in Aurora, installed and monitors the IPZoom 360° for Commport. He said he came across the technology almost by accident.

Miller was dealing with a technology that fell under the Grandeye Ltd. brand until he started having supply issues. Meanwhile, Grandeye came under the ownership of Oncam Global Group, a U.K.-based security solutions provider. Miller called up Oncam CEO James Ionson to check on the status and ended up talking about a new Oncam brand not even on the market yet: the IPZoom 360°.

“He indicated he had a new camera system coming out on the market, which was the Oncam 360 PTZ. I was very interested in this,” says Miller.

“He asked if we could do a pilot — some kind of a beta test in the Toronto area. We had a great customer here in Commport that had just been finalized with their security system.”

The IPZoom 360° works in conjunction with a conventional pan-tilt-zoom camera, allowing the operator to focus on a particular object or person and record an incident. At the same time, it also allows the operator to view the scene on a panoramic display.

According to Oncam, the IPZoom 360° camera can intelligently signal and control a co-located IP PTZ camera via software, giving you simultaneous use of both. The two cameras in concert provide the multiple views. The IPZoom 360° is used as a triggering device to send commands to the IP PTZ camera to provide high-resolution detail about an area of interest. Oncam claims that its camera, used in conjunction with a PTZ, could replace a dozen stationary security cameras.

The target market for the IPZoom 360° is large, open premises like marinas, construction sites and car dealerships, says Miller. It could also be used for critical infrastructure sites like power plants, pipelines, transportation systems, banking facilities and other high-risk sites.

Commport Communications is Miller’s first client for the 360°. Commport is a data storage facility that stores and protects information belonging to both corporate and public sector clients. For that reason, security at his facility is a high priority, he says. It was a clear choice for a beta test.

“At that time, it was an obvious move because of the set-up of this company being a data centre — a security-minded company and operation. We installed the 360°and hooked it back up into our monitoring station so that we could view any activity. The beauty of it, of course, with the IP connected PTZ portion, the operators could zoom in on an item at a very quick pace,” says Miller.

David Ralph, who runs Commport, has been testing the IPZoom 360° for the last two months, so far with good results.

“There’s not been a whole lot of incidents, but it’s good to know we can keep an eye on everything — literally, everything,” he says.

The camera is installed in the employee parking lot behind the facility, mounted high on a pole, giving him views of the entire neighbourhood.

“What I like most about it, beside the fact that it views my lot, it keeps an eye on the whole property,” he says. “I can see 360°around, I can see what’s happening next door, I can see the railway tracks. I can see pedestrian traffic, which we want to keep an eye on for security reasons.”

Ralph says he hasn’t had a security incident since the 360° was installed, but it has provided additional, unexpected benefits.

Ralph’s facility is staffed around the clock. By having the 360° in place, he feels more comfortable with employee safety after dark, especially in the small hours in the morning.

“What we found as a fluke almost: because we run a 7×24 shop and the staff is mixed male/female, the female members like the idea that they can control the camera, scan the lot before they go outside in the dark, which is very comforting.”

Using the 360°, and having it monitored by SecureVisionView, has also eliminated the need for guards, says Ralph.

“We rely on Bob’s crew, so we don’t have to have a security guard, we don’t need patrolmen. We can do that ourselves now and rely on Bob’s monitoring station to keep an eye on it for us.”

Miller operated his business under the name Maximum Monitoring until recently. In August 2010, it became SecureVisionView Inc. after Miller sold his 7,500 wholesale and retail to SecurTek Monitoring Solutions Inc., a division of Saskatchewan telco giant Sasktel. SecureVisionView is SecurTek’s first monitoring operation in Ontario.