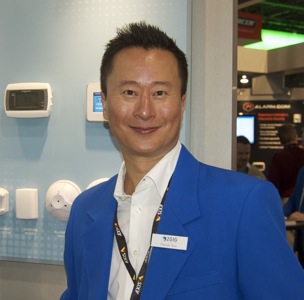 A year after launching their product quietly at ISC West in Las Vegas, 2gig Technologies is picking up steam with four distributors in Canada and a major partner in Reliance Protectron.

President Todd Santiago and co-founder Lance Dean say the company is moving forward and with the appointment earlier this year of Patrick Soo as the company’s Canadian Manufacturer’s Representative, 2gig is gaining ground on this side of the border as well.

“It took us about 18 months to launch the product and get it ready for market,” says Dean. “Then last April at the ISC show we launched 2gig to the industry. We weren’t in a booth or on the show floor; we did it with private meetings and it was really successful because we got to pick and choose the dealers we wanted to work with.”

Since last April 2gig has been approved by almost all the dealer programs in the United States and it sold over 200,000 panels in that first year. This month at ISC West in Las Vegas they had a booth on the show floor; it was the first time dealers could see 2gig without having a pre-arranged private meeting.

“That’s why it was such a zoo at our booth,” says Dean.

Dean and Santiago say the market was right for a new entry in the security market because consumer technology devices were dominating how users manage most aspects of their electronic lives.

“There hadn’t really been much innovation for the last few years in security. Everyone had the same keypads with the same little buttons. Today, everybody is moving to iPads and iPhones and apps and our industry was left behind,” says Dean. “Our goal was to come up with a cool product with more features like a smart phone to add new apps and applications.”

The other idea they had was that home automation was about to explode in the mass market.

“Before, it was very costly to do home automation. Homeowners and small businesses love home automation, they just don’t want to spend thousands of dollars to do it. We were the first to bring a self-contained product with a colour touchscreen with a Z-wave home automation package. It was never done before and we now combine that with the GSM radio because phone lines are going away. It hits the market at the right time when people are looking to do more than just security.”

“Alarm.com has really made the interactive services popular. They’re the first and the largest. ADT is coming on the back of what Alarm.com is doing so I think they’re trying to catch. They realize we’ve landed the big customers,” says Dean.

When it comes to cost, Dean says dealers are selling 2gig packages for between $99 or $399 for all the functionality and a monthly fee.

“We have some dealers doing it for $99 down,” says Dean. “The unique thing about our product is that if the sales team presents the product well some dealers are getting $800 down and more per month. We’re trying to get the guys who were getting zero down and $35 a month to go from zero down to $300 down and $40 or $49 a month,” he says.

In Canada Patrick Soo says 2gig is getting a lot of traction.

“The touch screen is more intuitive from the programming and installation side – once a technician has installed it, they’ve got it. We also have a smash and crash feature – so even if someone does try to take it off the wall we do get the alarm. Coming up in Q3 we will have French over the air capability. Today we’re installing English panels in Quebec but in Q3 we will be able to do an over-the-air update and the next day customers will have a French GUI and French programming,” says Soo.


2gig recently just recently added a fourth distributor in Canada — Provo, in addition to MyGuard in Edmonton, Vancouver and Toronto, N-Patrol in Woodbridge, Ont., and Multi-Secure in Quebec.

“All of these distributors have been phenomenal partners for us. We weren’t looking for box movers, we were looking for distributors who would bring a sense of support and service behind the product,” says Soo. “These companies remind me of the SSI’s or Burtek’s of old in terms of serving the customer and I think that’s been lost in terms of the bigger guys who are out there. These boutique distributors have been phenomenal partners for us in Canada.”

“We investigated different types of product that could expand the interest of consumers — we knew interactive features and functionality were coming to the market and we were looking for a product that was affordable and easy to install, easy to use and intuitive for the end user. 2gig appeared to be the best product out there at the time for our direct sales force in Canada,” says De Luca.

Protectron rolled it out across all of Canada earlier this year.

“We started with home security with remote capability and we’re progressively getting into video monitoring and thermostat control and eventually home automation. We’re testing the different features and validating it for the market. We need to find the right mix in terms of pricing to make sure it’s appealing to customers and profitable as well.”

De Luca says it does allow for improved average RMR but the cost structure is also higher because the product uses GSM.

“What we’re investigating is whether it’s sustainable over time. We think it will be because we think people appreciate the features they can leverage from the system, but it’s still too early to tell if people will go for all the bells and whistles but then realize over time that it’s costing them more,” he says. “I do think overall that there is a significant market for that. We are offering an alternative — it’s consumer choice and we’re giving the market time to give us feedback on sustainability. That takes a few years because many will have a contract already in place.”

Protectron also carries Honeywell as well as 2gig and in commercial they carry DMP and DSC products for small to mid-size businesses.

The principals at 2gig say they have plans to continue expanding their product line next year.

“In the last six months we have added 20 engineering professionals and we now have engineering teams in Carlsbad, California and Utah,” says Santiago. “We are aggressively pushing the innovation lever both on the existing product and on our next generation product which is under development. We have different development projects underway. One is to enhance the Go Control product line. We are looking at adding features to that and our next generation which will be launched early next year in early Q2 at ISC West is Touch Link which has a bigger screen and Wi-Fi capabilities,” he says, adding it will be targeted at a customer who wants to have a bigger screen.

The company also just hired a new Chief Technology Officer who was formerly the CTO of the Department of Justice in Washington, and several others have joined the company from the home automation world.

“We know there will be competition but we think it’s healthy for the industry and we’re not afraid of that at all. It also didn’t hurt that a company like Vivint (home automation company, formerly APX Alarm) decided to optimize around our platform,” says Santiago.