Headlines News
2017 Horizons: From drones to smart cities to cyber security and more

As is tradition, SP&T News is once again cracking open the year ahead and shining the light on upcoming trends in the industry. This time we pegged a number of experts in the field to see which directions CCTV, drones, cyber security, smart cities and the integration services business are all headed. If we can be certain of anything, analytics, cyber threats and hardware price erosion are all here to stay. 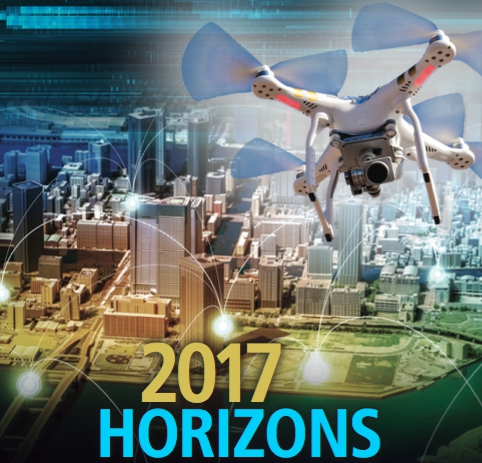 Drone-ing on
David Cooke, a former military pilot, was flying one of his drones along the harbour in Sarnia, Ont. one evening to get a shot of Chemical Valley’s flares and lights — for artistic purposes — when he had a run-in with security.

“The security company from one of the refineries came by and asked what I was doing,” he says. “They said you can’t fly over the industrial plants and I said I wasn’t and showed them on my display exactly where I’d been flying… And a few weeks later the head of that company, Lyndon Security, called me and asked for a meeting. Then, we began working together.”

For Cooke, founder and chief pilot at Canda, which provides drone video and photos services, and is a holder of the Special Flight Operations Certificate from Transport Canada, drones hold numerous possibilities for security, from monitoring fence lines, roofs and solar farm equipment, to tracking materials in storage bins.

“For a security firm, when they can subcontract the actual flying part of drone work, it’s a serious asset to them, not a threat,” Cooke says. “Some of these machines can cost $50-60,000 and then you have to train somebody and keep the crew qualified with the certificate from Transport Canada.”

According to Cooke, it’s the cost of drones that will be the hot topic in 2017.

“In order to fly commercially for surveillance and security, [companies will] often be driven towards compliant drone machines but I think the new trend will be a drive towards smaller and lightweight, less-restrictive machines… like the DJI Mavic Pro I just bought, the size of an iPhone 6 or so… It’s perfectly legal to fly but won’t cost them as much.”

The overall message is that drones don’t need to be an expensive process and you don’t have to own the asset, Cooke explains.

Oliver Philippou, a senior technology analyst with IHS Markit Ltd. in the U.K., says drones and how they will be used in security is an issue on his radar, too.

“Large integrators seem very well placed to use this type of application and a large number of them already have monitoring contracts, such as Johnson Controls and Securitas,” he says, noting he anticipates drones as a “force multiplier for man-guarding and alarm monitoring” will be something that doesn’t pick up until after 2017.

Changes in rules coming down the pipe for unmanned aerial devices in Canada will mean more opportunity for the security companies that are toying with the idea of using this technology for remote patrols and more, says Mark Aruja, chairperson at Unmanned Systems Canada, referring to the pending approvals to operate drones beyond visual lines of sight.

“This means the difference between flying a drone around your house and now using it to inspect a pipeline that runs down the Mackenzie River Valley for thousands of kilometers, so it’s a huge thing for the industry, with global implications,” says Aruja.

There is “an incredible” drop in price and an increase in performance of commercial technologies, Aruja adds, such as camera payloads and “radar payloads — that enable all kinds of security applications”, like monitoring for hydro companies, pipelines, etc. He says he sees the opportunity picking up for environmental monitoring, RF surveys and heat mapping.

Partnerships big for safe “smart cities”
As “smart cities” begin to take off, so does the market for “safe cities,” which includes aspects like updating the video surveillance infrastructure with analytics, says Alexander Richardson, a market analyst in critical communications with IHS Markit out of Austin, Texas.

According to Richardson, a safe city is “a multi-agency approach,” consisting of a “consolidated IT platform, bringing in a range of different security and law enforcement technologies.” This means there is video surveillance but also dispatch and emergency response equipment together on one platform.

The 2015 global revenue for the safe city market was about US$13 billion, Richardson says, noting it’s also a high-growth market, coming in at around nine per cent per year globally (between six and seven per cent in North America).

“We’re forecasting the market will reach about US$20 billion by 2020.”

He says there is plenty of opportunity for greenfield projects in areas like the Middle-East, where the market is less mature and they are currently installing CCTV cameras and control room infrastructure.

“In the mature markets, it’s more about the analytics and the things that go on top of the video surveillance infrastructure.”

Richardson’s advice for installers working in the Middle-East is to foster relationships with local firms on the ground, whether they are integrators or suppliers, because “you need to have connections to the local presence.”

In North America and Western Europe, he notes it’s important to establish “pull-through” with the end users, “because, ultimately they’re the ones who are picking the technology.”

Big data analytics may be a buzzword, but city interest is growing in deep data mining from things like records management databases, he adds.

For safe cities, partnerships are crucial, Richardson advises, and that’s not just with various government organizations but also with other businesses and even end users. He cites an example called Operation Shield in Atlanta, Ga. where the local police partnered with a transport agency, and bigger businesses like Coca-Cola, and shared their security cameras. “This way they were able to route everything into the police control room, rather than the police paying for extra cameras,” he explains. Reusing this infrastructure in such a way means not only cost savings but also more people buying into the security initiative, Richardson notes.

“Price erosion of hardware is not going to go away,” Cropley says.

“As new capabilities for video cameras come out, the cost of those goes up. However, a lot of the capabilities and focus going forward seems to be on the related services that connect to these devices rather than the cost of the devices themselves,” Brink says. “A lot of growth is still happening in video surveillance as a service and moving to Cloud surveillance as well as analytics software.”

Analytics are going to continue to make the “manned’ positions within the security industry more efficient, Brink says, so “you may wind up only needing one security guard instead of two or three watching an entire wall of screens” but the human element is never going to be fully replaced by analytic capabilities, she insists.

Cropley says he thinks there will be more spotlight on improving image quality and providing more storage capacity as well.  “In 2017 I also think we’ll see a greater focus on software,” he says.

There is also still heavy discussion on hybrid video surveillance systems, like the analogue with IP capabilities, Brink notes, or the different types of compression (H.265, H.264), because they bring new technology in without having to replace entire systems — an alluring cost efficiency.

Cyber-security means hardier devices
After this past year, Brink says cyber-hardened devices will be drawing attention because of DDOS attacks and their use of CCTV cameras.

“Because of all of the interoperability and interconnectivity between device systems, especially in commercial end-use market, the biggest challenge is just going to be able to anticipate where the problems are going to be and which backdoors you didn’t think about that are going to be used against you,” she says.

Attacks occur sometimes due to interconnectivity, Brinks adds, like an automated HVAC system that may have a hole leading to the automated security system.

“It doesn’t just come down to the cameras themselves; it comes down to the end users and their ability to know how to properly use the devices so they don’t leave them open for attack. So it’s not about pointing fingers at manufacturers,” Brinks says.

Terry Hoffman, principal of Zerobit1 Security Planners, agrees and says the next 12 months should see more educational efforts on how not to fall into schemes and protect yourself as you increase your levels of connectivity.

For Alex Vaystikh, co-founder of SecBI, a security technology startup, 2017 is about ransomware.

“Everyone is capitalizing on how to protect themselves against ransomware and encrypt their data,” he says. He sees servers and Cloud data being a target in the future, as the Cloud “doesn’t have an efficient solution to defend against ransomware.”

It’s not just the scale but the source of cyber attacks that are interesting, Vaystikh adds, as many are “cheap” IoT devices, such as a Wi-Fi controlled light bulb.

“That’s why we’re now seeing more systems using artificial intelligence or using machines to fight with other bots sending out threats,” Gazit explains. “Machines can look at data in real time and analyse it for anomalies, efficiently.”

“Historically, the installation and integration market was very project driven and what’s happened is there are big ups and downs in revenues, because it’s very difficult for integrators to forecast having project-based deliverables. So what integrators are trying to do is move to a recurring monthly revenue model where they’re focused more on providing service and maintenance contracts — particularly in the retail and commercial markets, where customers do not have onsite maintenance teams.”

In 2017, expect to see more integrated control rooms, he notes, where both security and operational management are working together in environments like large universities, power stations and airports.

“Something that’s going to diverge costs in both the smaller and larger verticals is the use of analytics, and how customers are going to be using them,” Philippou says. “As video analytics become more accurate and reliable, they will be used not only in a security aspect but in a business intelligence aspect as well.”

As an example, he cites airports that are currently using basic analytics, such as queue line management, trip line detection and number counting, to improve the customer experience.

“You’re going to be seeing integrators and installers hopefully talking with not just security personnel as a customer but also marketing and operational departments and therein tapping into additional budgets as well.”

He says he sees increased integration of multiple security disciplines, like information security, cyber hygiene, the operational side, and more emphasis on business resiliency.

“Client ownership is a big thing these days,” he says. “On a lot of the base enterprise projects, you may not be making the margin you made five years ago, but that margin can be made up over great customer service, maintenance plans and improving ROI with use of technology across multiple business domains.

“I applaud the integrators and installers. It’s a tough industry. A lot of challenges came up in 2016 for the typical security provider,” Hoffman adds. “2017 is not going to change. There’s competition and players outside of North America coming, but there’s lots of business opportunities out there.”